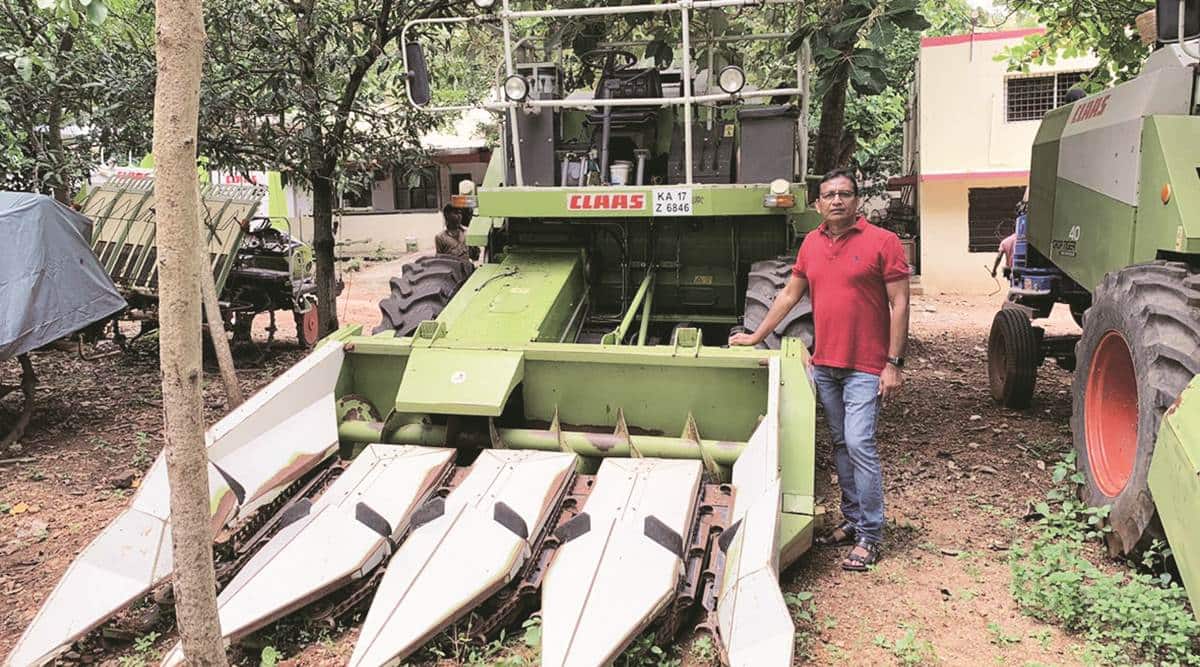 Harvesting entrepreneur Ramesh Babu with a maize header combine at his workshop in Davanagere, Karnataka.

“They have returned after the lockdown and will harvest the kharif (monsoon) maize in Davanagere this month, followed by Haveri and Shimoga districts in November and December. The same machines will also harvest chana (chickpea) and sunflower in Davanagere and Chitradurga during January-February. Then, we have the rabi (winter-spring) maize crop of Vijayawada (Andhra Pradesh) in March and Shikaripura (Shimoga) in April. Each combine would work for 1,200-1,300 hours during these seven months,” says Babu.

For entrepreneurs like Babu, and farmers, the multi-crop combines exemplify the next level of mechanisation. They harvest not just paddy and wheat, but also other crops where the use of machines is far less ubiquitous: chana, moong (green gram), tur (pigeon pea), maize, ragi, sunflower, soyabean and mustard.

Combine harvesting of paddy is something Babu has been doing since he bought his first machine in 2000. He now has 15 ‘Crop Tiger 30 Terra Trac’ combines that harvest only paddy. These have a well-laid-out route: They first go to Goa, Udupi and Mangaluru in October; cover Davanagere and Raichur from November till about December 25; and come down to Mysuru and Chamarajanagar and work till January 10-11 before taking a 20-day break towards Pongal festival. The next stop is Tirunelveli and Thanjavur (Tamil Nadu) in February and Nellore (AP) in March. From April to mid-May, the itinerant machines either operate in AP’s West and East Godavari districts or Karnataka’s Raichur-Yadgir-Gulbarga belt, before returning to Davanagere. By then, they would have worked around 1,500 hours.

Babu’s paddy crawler combines – they move on rubber tracks in the fields, while being transported by road on Ashok Leyland Ecomet 1012 light commercial vehicles – can cover an acre in roughly one hour and 10 minutes. Farmers are charged an average hourly rate of Rs 2,000.

“Paddy is an established business where I have 55 operators. They are all local people. My total running expenses (which excludes interest and depreciation) comes to Rs 1,400-1,500 per hour. Within that, the cost of diesel (10 litres consumption per hour) is nearly Rs 800 and labour Rs 350. Transporting the machines and operators’ food allowance accounts for the rest,” explains Babu.

For the two multi-crop combines – which he bought only two years ago for Rs 27.58 lakh each – Babu is employing operators from UP. “Two people are required per machine. I pay them Rs 35,000 per month per machine. This is less than the Rs 45,000 per machine plus a Rs 50/hour incentive for the Terra Trac operators, who are locals. I charge more for maize (Rs 2,500/hour), as it is a new business that will take time to get established,” he says.

Mahendrappa Havalamanavar is a smaller entrepreneur, who also started with a Terra Trac paddy combine, albeit a second-hand one, that he purchased in 2017. But the 62-year-old, who farms five acres at Holalu village in Bellary district’s Huvina Hadagali taluka, soon disposed of the machine as he couldn’t afford to take it to distant places for harvesting jobs. In August 2018, he invested in a Crop Tiger 40 Multicrop combine and followed it up with a second one a year later.

Havalamanavar, unlike Babu, works only in Karnataka – mostly in Bellary and the adjoining Haveri and Gadag districts. He first harvests moong in August that takes up 200-odd hours and then maize during September-December (800 hours). In January, he does chana (200 hours) and ragi in February-March (150 hours). Only during April-May does he take the machines more than 150 km away to Shimoga for 200 hours of rabi maize harvesting

The multi-crop combines are self-propelled, having their own wheels for moving on roads. They don’t need to be lugged on separate vehicles as with the Terra Trac crawlers that entail additional costs. Moreover, Havalamanavar is able to command higher harvesting rates – from Rs 2,200/hour for chana to Rs 2,600-2,700 for maize and Rs 3,000-3,500 for ragi.

The first is a general shortage of farm hands, which is a secular trend. “Agricultural labour availability is falling year to year. The reverse migration of workers we saw (due to the Covid-19-induced lockdown) is a temporary phenomenon,” he tells The Indian Express.

The second is efficiency. For farmers, managing labour is a cumbersome affair. Harvesting an acre of ragi requires some 10 people working a whole day. The harvested crop further has to be tied into bundles and taken for threshing (separating the grain from the straw), which needs extra labour. The combine, on the other hand, will harvest, thresh, clean and deliver the grain to the farmer’s tractor trolley – all in just over one hour. At Rs 3,000-3,500/hour, even the cost difference vis-à-vis manual labour, given daily wage rates of Rs 200-250, may not be much. That apart, the farmer can now concentrate fully on growing and marketing his produce.

The third factor is technology. Singh concedes that yield losses from manual harvesting are lower (hardly 1%) than from normal combines (up to 10%). But the quality of machines also has undergone significant improvement over the years. The Crop Tiger 40 Multicrop combine has two different cutter-bars or “headers” – one for all grains and the other specially designed for maize. In regular crops, the entire plant with the stem gets cut and goes inside the machine. The maize header ensures that only the cobs enter the machine, which then separates the grain. The kernels are collected in a grain tank and the empty cobs thrown back to the field.

“We have a proprietary tangential axial flow threshing technology that enables delivery of clean unbroken grain. The crop losses will, as a result, not exceed 1.5-2%,” says Singh.

Besides CLAAS, the US farm equipment giant John Deere and the Nabha (Punjab)-based Preet Agro Industries are selling multi-crop and maize combine harvesters in India. Covid vaccine to be given free in state: UP well being minister 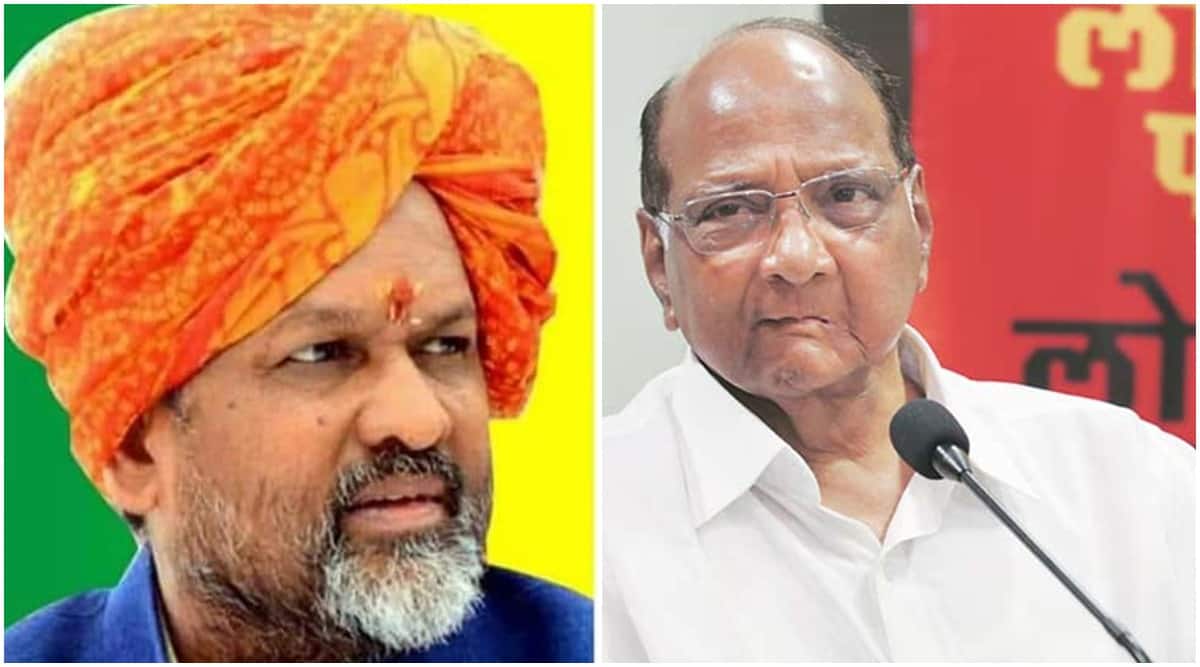