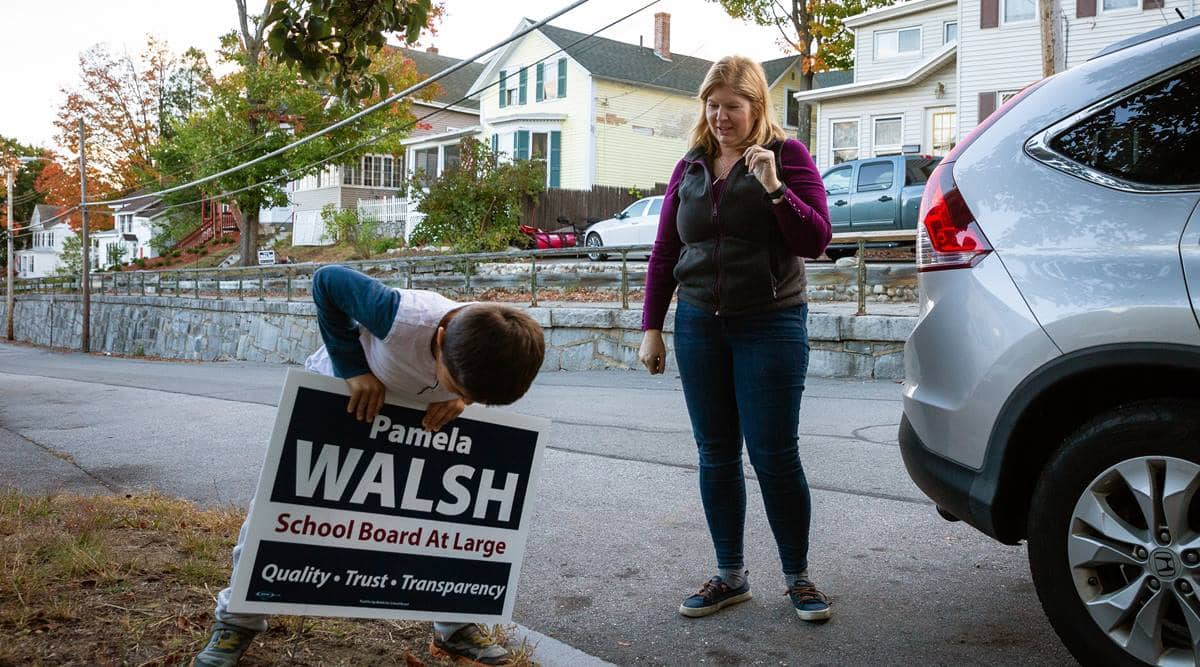 Pamela Walsh and her 7-year-old son, Luke, install campaign signs on Oct. 8, 2020, in Concord, N.H., where Walsh is running for the school board. The coronavirus pandemic has inspired new candidates to run, and defined the debate in campaigns up and down the ballots. (Elizabeth Frantz/The New York Times)

The coronavirus pandemic upended Pamela Walsh’s life. It shut down her office, leaving her working at home from a folding table. It forced her to turn her dining room into a Zoom classroom for her 7-year-old son. And the virus propelled a still more unlikely change: It led Walsh to run for public office.

“It wasn’t even on my radar screen,” said Walsh, 47, a political adviser in Concord, New Hampshire, who has long worked for Democrats but never before considered seeking elective office herself. Months of supervising elementary school lessons from home, with little idea of when her son would return to school, convinced Walsh that she should vie for a seat on her local school board.

“I decided I needed a voice like mine on the board,” Walsh said in a phone interview, which she muted periodically as her son called out for her and at one point thumped a bat on a chair. “Everyone is struggling right now a bit and needs to be represented by how these policies impact real families.”

By some measure, all politics is virus politics in 2020, and the federal government’s handling of COVID-19 has become an explosive issue in the presidential race, which has been further complicated by President Donald Trump’s own hospitalization for the virus.

Yet around the nation, there are local and state races in which the pandemic has also taken an outsize role. In some cases, the virus has been the reason for running; in others, handling of the pandemic has become the defining issue, eclipsing ordinary matters of taxes and services.

The virus — and the government’s response to it — has inspired parents, hair salon owners and others to run for the first time, turned sleepy races into competitive matches and injected a level of unpredictability and rancor into normally tranquil down-ballot contests.

“This is an issue that no one expected to be one of the pillars of this election, but it has clearly become one,” said Robert Griffin, research director for the Democracy Fund Voter Study Group, which is partnering with academics at UCLA to poll about 6,000 Americans each week leading up to the election.

Trump’s own bout with COVID-19 only intensified some of the debates over the issue in lower races. “If you, Mr. President, have the best health system in the world and bodyguards and the whole thing, and you still get it, what does that say for us at the local level who are trying to figure out what to do with our children?” asked José Luis Bedolla, 50, who said he was motivated to run for the school board in Berkeley, California, because of the pandemic.

Candidates’ own cases of the virus have created all sorts of uncertainty for political races, yanking campaigns off the trail and into quarantine during crucial weeks and confounding political strategists, who have little precedent to lean on as they try to figure out how voters will respond.

In North Carolina, a race that could help decide control of the U.S. Senate was thrust further into limbo this month when Sen. Thom Tillis, a Republican, tested positive for the coronavirus after attending a White House ceremony. At the same time, his opponent, Cal Cunningham, is contending with a texting scandal.

In Missouri, where average new daily cases have risen sixfold since mid-June, the governor’s race is being defined in no small part by the pandemic. Gov. Mike Parson, the incumbent Republican who is leading in the polls, had resisted requiring people to wear masks and at times campaigned without one. Then last month, he came down with the virus himself.

As Parson was sidelined, his Democratic opponent, Nicole Galloway, wished him well while also soliciting donations in an effort to remind voters of their dueling positions on the virus. An online ad showed her wearing a blue mask, side-by-side with a barefaced Parson.

“Gov. Parson has failed this test, and it’s apparent,” Galloway said in an interview. An accountant by training and the current state auditor, she has made public health a key issue in Zoom appearances, uses elbow bumps on the campaign trail and has said she will issue a mask requirement if elected.

Elsewhere, conservatives have made their opposition to mandates on masks and business closings the center of blossoming campaigns.

In Washington state, a small-town police chief has made Gov. Jay Inslee’s handling of the pandemic a top issue in a long-shot bid to become the state’s first Republican governor since the 1980s. The chief, Loren Culp, has criticized Inslee, a Democrat, as a “job killer” and is drawing a contrast by holding rallies where masks are not required.

In Texas, a salon owner who was jailed this spring for defying shutdown orders quickly became an anti-lockdown hero for the political right. The owner, Shelley Luther, spoke at rallies, gave Sen. Ted Cruz a haircut and donned a T-shirt emblazoned with the popular Texas rallying cry “Come and Take It” — except in place of a cannon, there was a blow dryer.

Now Luther, a former high school teacher who has never held public office, is running as a Republican for a seat in the Texas state Senate.

She has put Gov. Greg Abbott’s handling of the pandemic and his virus-related restrictions at the forefront of her campaign. The outrage over her jailing was so intense that Abbott, a fellow Republican, softened his own shutdown orders and removed confinement as a punishment.

Running in a largely rural Republican district northwest of Dallas, Luther has called Abbott “our tyrant governor” at campaign events. One of her ads showed the black-and-white security footage of the moment she was handcuffed as she looks into the camera and says, “I fought back, and they backed down.”

“It’s about time that we the people take this back into our hands and let the government know that they work for us and they should not be telling us what to do like this,” Luther said last month on the talk show “America, Can We Talk?”

And then there was this wrinkle: Her main opponent, a Republican lawmaker, state Rep. Drew Springer, was sidelined for days during the race; he had to quarantine after his wife tested positive for the virus. Luther won 164 more votes than Springer during a recent special election, and the two are now in a runoff set for December to represent Prosper, Texas, a Dallas suburb that is one of the fastest-growing areas in the state.

Restrictions to control the spread of the virus — or the lack of such restrictions — have become motivating factors in races of all sizes.

Adrian Perkins, the mayor of Shreveport, Louisiana, had no plans — and no money — to run for U.S. Senate at the start of this year. But he grew increasingly frustrated as the coronavirus swept through his city, sickening thousands and leaving many others unemployed. He tried ordering everyone to wear masks but got sued for that.

So Perkins, a 34-year-old Army veteran and Harvard Law School graduate, began a last-minute, long-shot bid to go to Washington, where he felt he could have more sway. He announced his candidacy in July, two days before the registration deadline.

“No sane person launches a Senate campaign on purpose with just 110 days,” said Perkins, a Democrat who is running to unseat Bill Cassidy, the senior Republican senator from Louisiana. (Cassidy, a medical doctor, tested positive and recovered from the coronavirus this summer.)

Perkins’ campaign said he has raised $1 million in just a few months, but his odds are long. His opponent, who already had more than $6 million on hand by the time Perkins entered the race, has a solid lead in a mostly red state.

But the long shot is worth it to Perkins, who grew up in Shreveport and described the federal government’s missteps in response to the pandemic as the reason for his campaign.

“Without the coronavirus, I wouldn’t be running,” he said, adding, “It’s people’s lives that were on the line.” 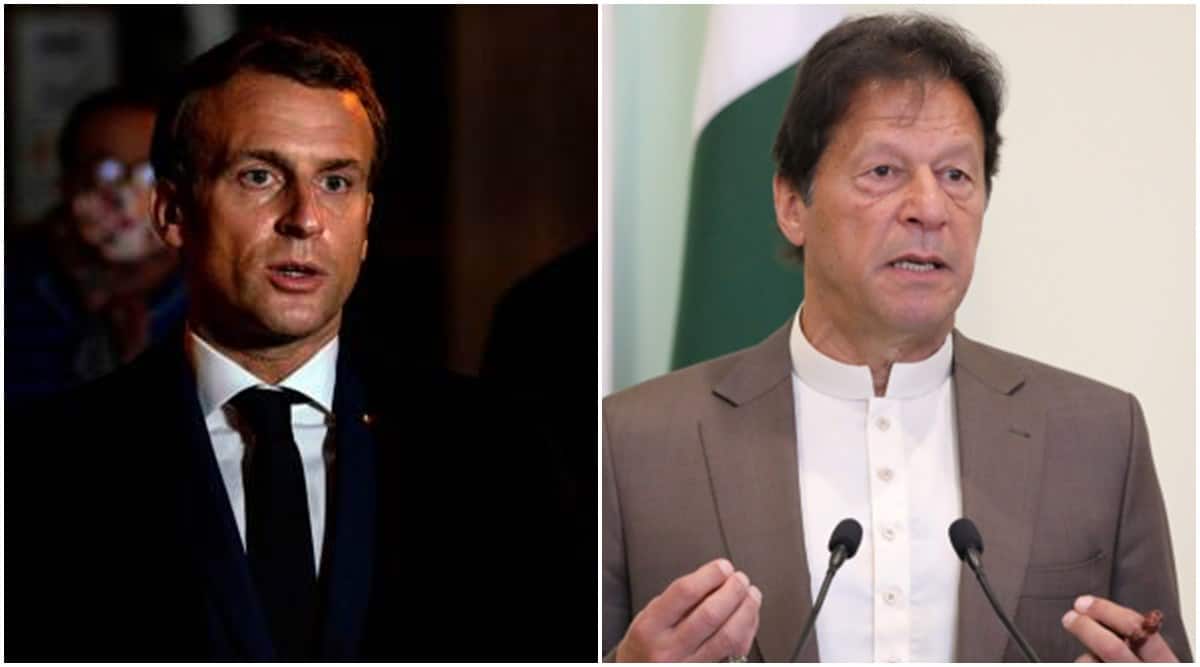 Pak’s Nationwide Meeting calls for recalling of envoy, however Islamabad has no ambassador in France 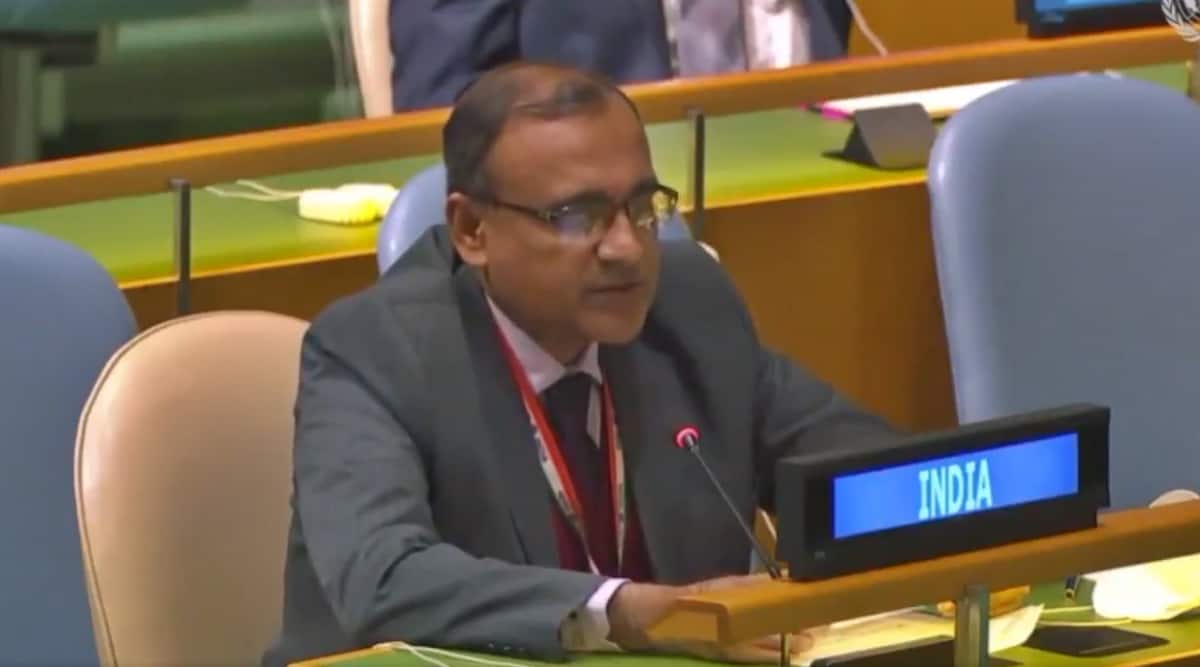