Samsung Galaxy Tab A7 can be used for writing and editing home assignments on Google Docs or making a presentation. (Image credit: Anuj Bhatia/Indian Express)

With schools mostly shut due to the coronavirus pandemic, parents have a really hard time deciding on whether to buy a tablet or a laptop for their kids’ online classes. It’s a difficult decision to take, but as the Samsung Galaxy Tab A7 shows, there are options out there.

The Galaxy Tab A7’s design feels familiar, and that’s not a bad thing. It measures 7mm in terms of thickness, weighs in at 476 gram, and comes in grey, silver or gold colour options. Its back has a smooth metal finish, while the 10.4-inch screen is surrounded by sizable bezels. The bezels are dramatically smaller compared to huge bezels seen on Apple’s eight-generation iPad and Tab A7 looks nice. The Galaxy Tab A7 is light and comfortable to hold for extended periods. (Image credit: Anuj Bhatia/Indian Express)

For some reason, I found the Tab A7 perfect for reading e-books and e-edition of newspapers. It’s light and comfortable to hold for extended periods. I can read news articles, watch videos, play games or attend conference calls. In terms of portability and ease of use, tablets will always have an upper hand over laptops any day.

The Tab A7 has a roomy 10.4-inch 2000 x 1200 display that isn’t an AMOLED panel. Instead, Samsung uses a regular LCD panel that gets bright enough but lacks sharpness. The Galaxy Tab A7 is clearly aimed at offering a cheaper option against entry-level Windows laptops, and given the cost of the tablet, the screen seems to be fine. I just finished watching season one of Utopia on Amazon Prime Video, and I never felt the LCD screen of the Tab A7 any less superior. 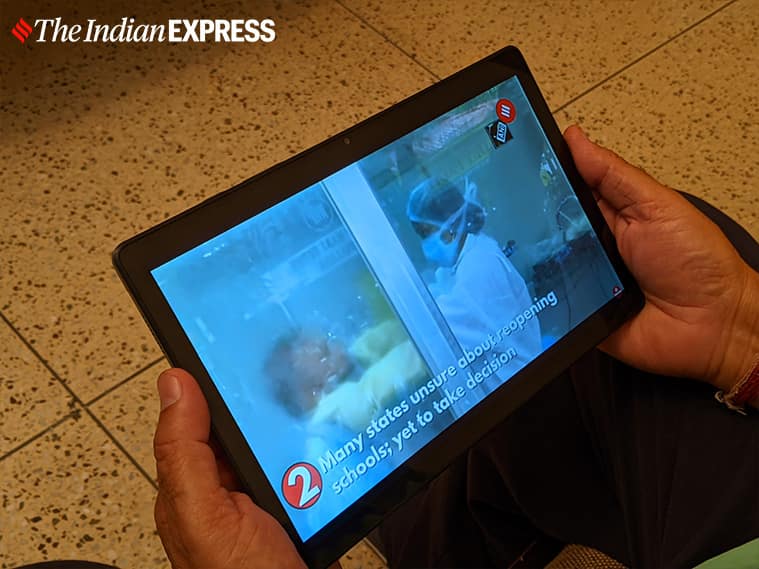 For me, though, the biggest feature of the Tab A7 is its quad speakers. You will find four speaker grilles on the top and bottom vertically, left and right when horizontal. They get so loud that I can hear the sound coming from the speakers in another room. I haven’t found a single tablet or a Windows 10 laptop that offer quad speakers in this price range. Though quad speakers sound amazing on the tablet, the headphone jack is gone. This surprised me since the Tab A7 will be mostly used by kids. It just seems strange on the part of Samsung of not including the 3.5mm headphone jack on the Tab A7.

Powering the Galaxy Tab A7 is a Snapdragon 662 processor. On paper, it’s a mid-range processor but for routine tasks like editing an assignment on Google Doc, browsing the web, chatting on WhatsWeb or watching YouTube, the Snapdragon 662 should be powerful enough. In my testing, I haven’t found the Tab A7 struggle to open commonly used apps or run not-so graphically intensive games. It’s really fast for my workflow activities like editing and proofreading stories, checking emails, editing photos on Pixlr, and occasionally tweeting my stories. The Galaxy Tab A7 doesn’t match the lightning-fast speeds of the Galaxy Tab S7+, but for most people, that ain’t going to matter much. 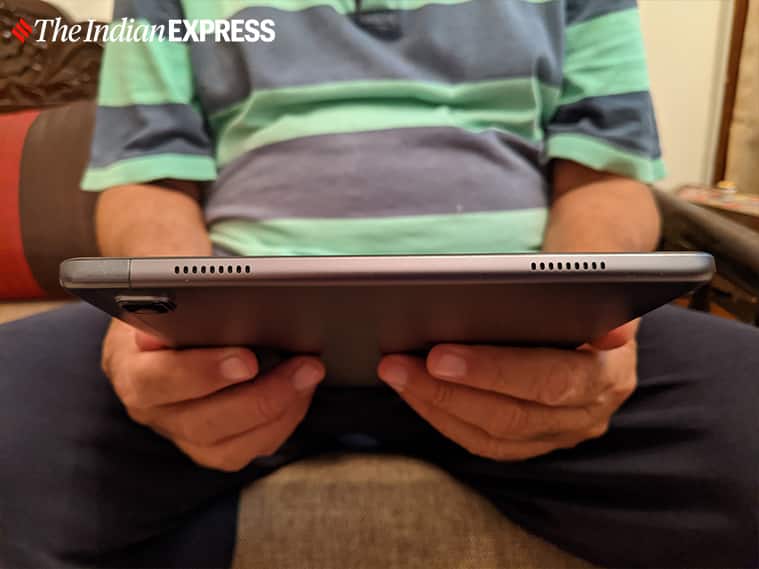 The quad speakers get so loud that I can hear the sound coming from the speakers in another room. (Image credit: Anuj Bhatia/Indian Express)

The cameras, an 8MP snapper on the rear and a 5MP camera on the front, are there. I haven’t tried the back camera but I did use the front-facing camera for a Zoom call and it’s okay. The Galaxy Tab A7 has a large 7040mAh battery capacity with 15W fast charging support. I got roughly 8 to 9 hours of battery back, which is longer than more laptops. I found the Tab A7 perfect for reading e-books and e-edition of newspapers. (Image credit: Anuj Bhatia/Indian Express)

The Galaxy Tab A7 runs OneUI 2.1, which is based on top of Android 10. It’s a well-designed interface, but you won’t have the same level of customisations and features that you will find on the Galaxy Tab S7+. It’s a straightforward interface that works well for a tablet like the Galaxy Tab A7.

The Galaxy Tab A7 isn’t designed to be a productivity-centric tablet as it lacks the S Pen support, DeX mode, and a snap-on magnetic keyboard. That said, the Tab A7 can be used for writing and editing home assignments on Google Docs or making a presentation. You can split the screen between various applications or have multiple user accounts on the Galaxy Tab A7. This way the whole family can use the Tab A7 and customise the tablet the way they wanted it to be. 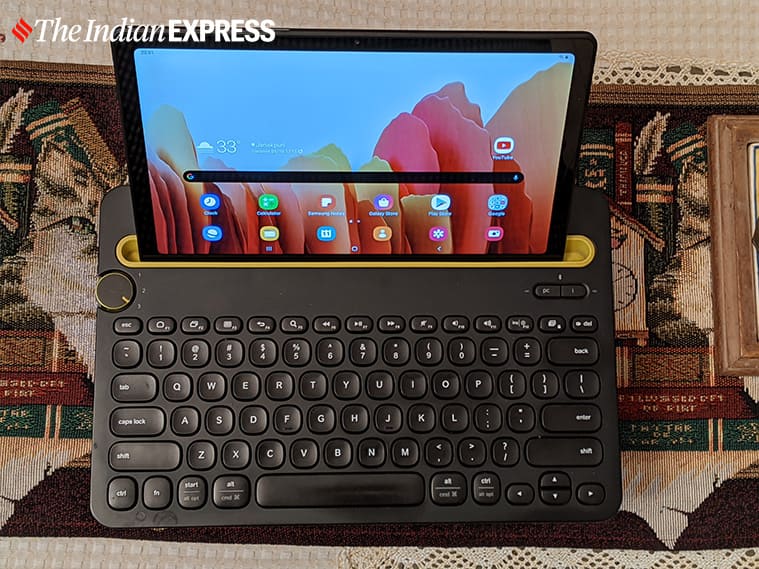 Samsung Galaxy Tab A7: Should you buy it?

Even though the Galaxy Tab A7 is marketed as a multimedia tablet, it can be a terrific device for everyday work, too. In my case, I paired a Logitech K480 Bluetooth keyboard to the Tab A7 and used the tablet for writing stories and attended most product launch briefings. I won’t say this tablet can replace a computer, but if your child’s purpose is limited to attending online classes or writing assignments on Google Doc, the Galaxy Tab A7 fits the bill. And yes, the tablet can be used by any member in the family for consuming multimedia content, thanks to a 10.4-inch screen and the quad speakers. After all, the Galaxy Tab A7 is not restricted just for educational purposes. I think that’s the purpose behind the Galaxy Tab A7. It can be your child’s first device, or your mother’s cooking classes companion.